In the Middle Ages, reasonable access to religious worship was the prerogative of the rich in a township like Leeds.  So, not counting the private chapel of the local knobs, it was 1630 before a chapel was built in Armley, and 1674 before it was consecrated by the Archbishop of York.

This delay was due to the somewhat chaotic times between Charles I and his son II.  The Chapel was a small building on one level, and we have been able to make a reasonable guess as to its original layout using floor plans of the developing Chapel dug out of the Lambeth Palace library website:

and eliminating the reported extensions. Thus the 1630 Chapel must have looked like this  →

The floor plan would have been: 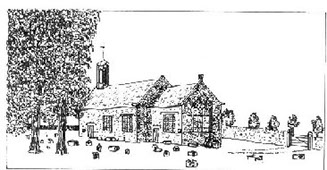 In 1737 drastic changes were made to the Chapel.  It was extended out to the north, the roof was raised and a small balcony added at the west end.  In noting this there is a suggestion that another smaller balcony had been built some time earlier.  The roof raising was not particularly significant as a contemporary story handed down and recorded at the end of the 19th Century refers to children sat at the back writing and drawing on the ceiling.

This shows an altar at the east end and a dominating pulpit that at  some time in its early life became a three-decker.

(From such a pulpit the lower deck was used for public announcements of jumble sales and hangings, etc., the middle level for readings from the Bible, and the top floor for the most important activity – preaching the Word.) 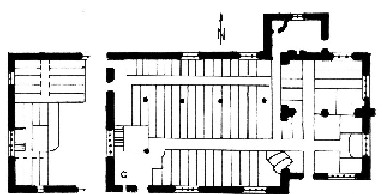 The pulpit still dominated, but the altar was beginning to take something of a back seat with these changes.  This is the the first plan recorded, along with an exterior sketch and details of the 1737 extension, from which the first plan was devised.

By the turn into the 19th Century, the old building was becoming cramped, and the Gott family was very much in charge as far as providing funds and initiating changes.   Benjamin Gott (1762 - 1840), the local industrial pioneer, had wool mills at various locations in Leeds.  He was a man of world importance, and one of his mills (Bean Ings) was noted to be the largest in Europe .  He was commemorated in the Chapel after his death by a very lifelike recumbent statue, the work of a distant cousin, Joseph Gott, which is now to be found in the ‘new church’.  Gott’s local Armley Mill remains as an award - winning industrial museum.                            www.leeds.gov.uk/armleymills/ 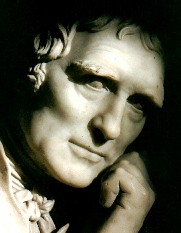 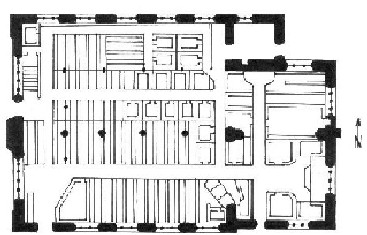 In 1825, the chapel received permission for the massive alterations that Gott had in mind, extending and enlarging the chapel, adding aisles and balconies.  In part, this was inspired by a desire to improve the Gott family and staff pews, but mainly to accommodate the rapidly increasing population of Armley.

The chapel now looked as if the original ground plan of 1630 had been cloned and built on to the side, except for the fact that the altar remained hidden in the south-east corner, while the pulpit quite ingeniously remained the focus of attention.   Even the balconies were built only along the north and west sides, as a south wall balcony would not be able to see the all-powerful pulpit. 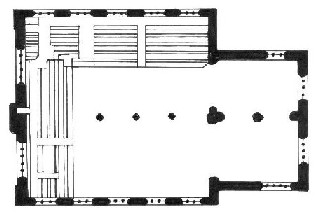 As the Gott influence waned, all the private boxes were replaced by pews, which did away with privilege and increased the capacity of the chapel.  This was done under the guidance of ‘new governors’ in 1861.

Two things happened now; a new dynamic vicar was appointed in 1866, and a year later a breakaway parish was formed in Upper Armley .  Under the financial guidance of the new head of the Gott family, a magnificent new church, Christ Church, was built.  With its imposing tower and full peal of bells it put the Armley Chapel into the shade.  There is a danger of cynicism creeping into this historian’s writing now, for within a year the chapel was decreed to be too small, and a new church was desperately needed to replace it ‘because of the expanding population and to be more fitting to the Glory of God’.

With  a  ground  area  nearly three times the extent of the old  chapel,  and  a  height  half  as  much  again  than  the neighbouring Christ Church, it is apparent that something other than the expanding local population was firing the imaginations of the manor dwellers, as they went on to produce the largest church in what is now the Diocese of Ripon and Leeds. Internal ornamentation and decoration further enhanced the grandeur that the hilltop exterior had already impressed on the mind. However, a minor aspect of the objectives seems to have slipped by, in that although the new church was four times bigger in volume than the chapel, it afforded an improvement in accommodation, compared to the old chapel, of minus 13!  963 down to 950!

(This was to get worse, as when the organ was installed a couple of years later, another 75 seats were lost, and the transfer of the statues into the new church removed another 32.  Ultimate accommodation was 120 less than the old chapel the new building replaced!) 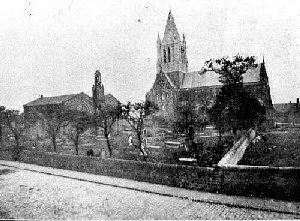 Building of the new church started in 1872, and it was opened somewhat prematurely in 1877 in an unfinished state.  Porches, boundary walls and gates, and the choir vestry were added shortly after as funds became available.  Some contemporary financial wizard accepted the cheapest quote, when for £500 extra they would have got all the trimmings plus a tower.  The congregation had to wait until 1903 for that to be added.

From the Sequence of Events  it will be noted that as Eduard was tapping down the last tuning collar of the nomadic Schulze Organ in Harrogate's St.Peter's, prior to its inaugural recital, a gang of locals in Armley were barrowing the old organ across from the redundant chapel to the new church alongside, ready for the service of consecration. There must have been a sense of anticlimax as this tiny instrument squeaked forth for the first time in the vast building, about as effective as a harmonium in a quarry. So the stage was set for a spot of unpleasantness between the two good maidens of Harrogate and their vicar; the appearance amongst the small ads of the subsequent availability of the Schulze; the forthcoming nuptials of an Armley cloth magnate's son - Henry William Eyres, who needed something to impress a young bride; and his brand new local church with its bonsai organ rattling in a vast space.  Hence the eager snapping up of the Schulze instrument.

St.Bartholomew's is big. 57 metres long by 18 metres wide, with the main nave taking up 33 x 11 of this total area. Instead of being able to touch the roof, as could be done at times in the old chapel, this one soars some 34 metres into the air. All for £20,000 at 1872 prices. It was designed to have a tower, but funds were drained once the basic structure was up and running, and it wasn't until the turn of the century that a £3,000 appeal was launched to add the icing to the cake (and really rub the neighbours at Christ Church in it!).

Once more the Eyres family stepped in - a family who really knew how to delight their womenfolk. This time one of the young ladies was celebrating her 21st birthday, and knew in her heart of hearts that what she really wanted as a present was a £3,000 tower to put on her church. Not only a tower, but one with a spire to finish it off, rising to a height of 57 metres.

Built in local sandstone, the building is faced internally in Ancaster limestone - a stone which responded well to the steam cleaning of 1964, unlike the exterior. Here, only one porch was cleaned as a sample, the result proving to be virtually undetectable when compared to the rest of the building. Smooth pillars of Greenmoor stone separate the main and side aisles, leading the eye down to the 'love-it-or-leave-it' reredos at the east end - a Wedding cake structure on an alabaster base (matching the pulpit) topped off in Caen stone from Normandy. Mosaics and painted tiles abounded, but these were kept in check by a sudden drought of benefactors. This has thankfully left a respectable number of bare panels, rather than the overwhelming aspiration of fully decorated walls. Most woodwork, such as the choir stalls and screens, is carved in American walnut. The style throughout is Victorian mock-Gothic.

Vandalism, both mindless and intentional has been much in evidence. By the end of the last century, many stained glass panels bore the evidence of stones and air rifles, and upkeep of the exterior porches and lower appendages was a constant battle.

Sadly, some desecration has occurred within, much of it fortunately reversible. The long lines of the nave string courses encouraged the introduction of strip lighting, which in turn allowed for the installation of longitudinal gas radiation heating.

Interior of the Church in the late 20th century 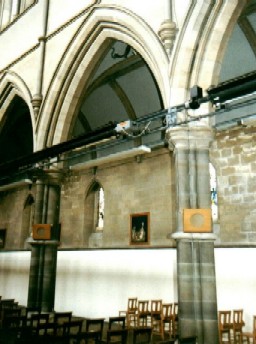 Not replaceable was a low chancel wall removed on the whim of an incumbent who saw it as a barrier between congregation and officials. What this man might have done if he had ever been let loose in any of our ancient cathedrals does not bear thinking about!

A fine view of the chancel wall and one of its two gates, and the organ.

Picture taken in the 1930s by the long-serving PCC Secretary, Mr. R. Nicholls 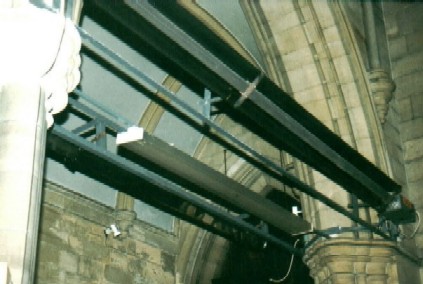 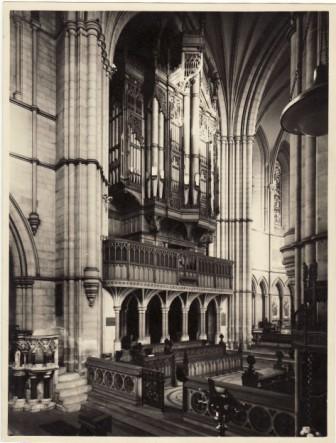 From our standpoint here in the early 21st Century, the church appears to have been just ticking over in the latter half of the last, as the great Restoration 2000 – 2004 burst out upon us.

Meanwhile, with its hilltop position, the Church, seemingly unchanged, stands out as a landmark in Leeds , with its tower visible for many miles in all directions.

For stunning pictures of the church, tower & organ, by Phill: 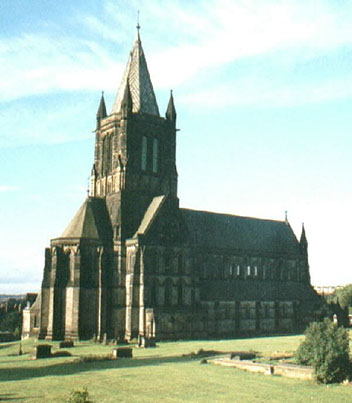 Contributions to the Church Fabric are most welcome.   To give on-line, click the area below.

I wish to give my donation to St. Bartholomew’s Church Fabric Fund.

I am a tax payer, and wish to give my donation under the Gift Aid Scheme.

<<<Click Here>>> to visit our sister site where you can make donations and purchase goods.