Our Church Hall was opened in 1968 by a then popular DJ, originally known as the Parish Centre, but  now named St. Bartholomew's Church Hall.   It replaced the Men's Institute, 200 yards down the road from the Church, a dour place which even at the end of its church life still bore the aura of its 'Men Only' origins.  Between the 1920s and 50s an ex-Army wooden hut, complete with stage, was set up within the Institute grounds and acted as a true Parish Hall, hosting a light opera society as part of its social activities.

Purpose built for its time, the new building  was erected directly across the road from the Church, and consisted of a large hall and stage backed by a multi-purpose room, with two smaller meeting rooms at the front.  Because the Hall accommodated school dinners, the side kitchen is quite large, and was fully fitted out for that purpose.  Toilets and a car park completed the picture.

Perhaps the most significant changes were the later withdrawal of the school use, and a radical social policy introduced by the then Vicar, Rev. Owen Conway, in the form of a remark he made in 1974 - "I think we ought to open a bar."   Unusual enthusiasm had it up and running by the end of the year in one of the small front rooms.   So successful was it that in 1980 it had to be re-located, with the larger room behind the stage forming the Bar Lounge, and with a built on serving area and cellar.  the Social Club serves as an oasis for many of the activities in the hall.   It has a membership of around 150, and welcomes junior members, so that on a typical social night it harbours people aged from 15 to 80+  in a happy mix.  In 2001 an outside area was created with seating and a pergola. 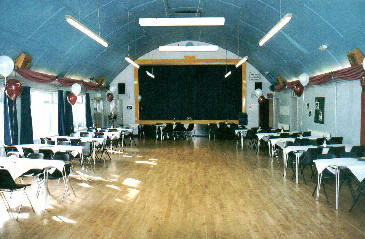 Another innovation around the same time was the employment of a Parish Secretary which sealed the fate of the second small front room, ever since being the Parish Office.

Today, the Hall  consists of the  main hall  and  stage, two offices, a large kitchen, refurbished toilets (to include disabled facilities), and the Social Club.  New central heating was fitted in 2001.   Available for functions,   the   Parish   Hall   is  active  all  week,   see

The Hall is regularly taken over for Blood Donor  sessions and is used as a Polling Station.

The Kitchen was newly furbished, almost entirely  by   volunteers, in 2003.

St Bartholomew's Church Hall is available for hire for long term lets, i.e. for clubs, classes and social groups to use as a meeting place, and for hire for one-off events, wedding receptions, parties or other functions.